This is one blog that I couldn’t postpone until tomorrow. So much to talk about and so much to say for the HALF WAY POINT (!!) of the 30for30 challenge. Let’s go back to the beginning…

Earlier this year, I met up with my friend Hannah at our fave pub to meet up – The Cholmondley Arms. We were doing our usual chit chat when Hannah mentioned the best idea of 2018 so far…. Why not create our own run for the 30for30 challenge?!

She explained that she wanted to get involved in the challenge but couldn’t really run, and that her Dad had been impressed by the challenge so far and wanted to help out by offering his house for a venue for our own run! WOW

We hopped in the car and went around the corner to meet Hannah’s Dad – and fast forward half an hour, we had discussed details and set a date.

We charged £5 for the 5k and £10 for the 10k and slowly but surely, people started signing up. We managed to get 55 people registered over the past couple of months…

For those of you that know me well (especially at work), will probably know that planning events brings me utter panic and I will stress at the smallest things until the last second. What could go wrong?

Instead of a bridezilla, I was being a bit of a racezilla. Hannah on the other hand, is really chilled out and knew everything would be OK.

We spent the day at Costco yesterday (what a great place) picking up final bits for after the run and headed to Nantwich to set up stuff at the house and go out for a pre race dinner and a few drinks – we very nearly cracked open one of the bottles of wine for winners, so Christa/Ste – you’re lucky 😂

Once final prep was done on the morning, our first guests began to arrive. I’d ordered some 30for30 race numbers especially – the registration process went smoothly and we were all stood shivering waiting to start…

The 10k walkers set off around 10am so that they weren’t left on course and the runners set off pretty much bang on time at 10:30 after a bit of pre-race briefing from moi. Basically, stay safe and don’t run in the potholes.

Loved the feeling of all 50+ of us leaving together and running down the country lanes. In the racezilla panic, I’d not thought of the fact I actually had to run 10k! But having all of these friends, family, colleagues, friends of friends and even people who had found us on the internet running together for this cause in memory of Adam – just amazing.

I think everyone will agree that the scenery and route couldn’t have been better – despite not closing roads, I don’t think we faced 1 car – only horses..

In the worry of everyone else getting lost… I actually got myself lost by missing an arrow, taking about 5 others with me who presumed I would know?! HA. Turned out back at the same place and didn’t really affect us though… 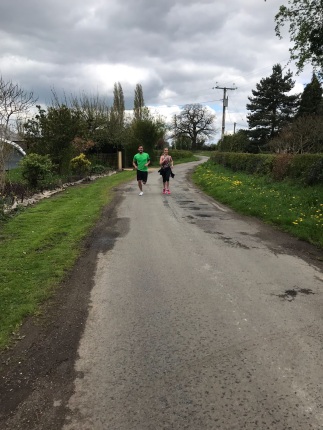 I finished around 52mins for the 10k to a loud crowd of the 5k finishers which was lovely. After gathering our medals and goody bags, we gathered around the back for BBQ food and music from Hannah’s Dad’s band.

The weather was kind to us and moods were high from what we had all achieved! A massive well done to everyone who finished – a lot of first 5ks and 10ks done by people this morn. Also a number of people calling me mad for doing it for fun but I bet the feeling now spurs everyone on to do another 😄

Prizes were then handed out – I am absolutely NOT a natural public speaker. Speaking on the mic in front of 50 people and I was crumbling but managed to give the correct prizes to the correct people with my glamorous assistant HJB. Well done to:

So… What it was all about and what everyone who attended today wants to know… What did we raise in that cake sale bucket?!

All thanks to you lovely people…

Please send me any pics that you took 🙂

The money will be transferred to the Virgin Money Donation page over the next few days.

Finally just want to say thank you to:

Half way through the challenge and ready to take on the next 15 races until November!