The second half of the 30for30 challenge kicked off yesterday (race number 16) with the Liverpool Rock n Roll half marathon, which just so happens to be my favourite race and where my ‘love’ for running began…Going back a number of years, my running regime consisted of a local 4mile route every now and again, doing a bit of a walk/run, until one day I decided to just try and plod a full 6miles… I succeeded and in my post-run high, decided to search the internet for a race to apply for to keep me going.

As you can probably see by now, I like to set myself a bit of a challenge, so when I saw that the ‘Liverpool Rock n Roll Half Marathon’ was 3months later, I signed up and set a training plan.

From that moment, I upped the mileage and started to get a little quicker. This was 3 years ago and I have done this half marathon every year since and just love it.

But what makes it so good?

Because I wasn’t much of a runner a few years back, I didn’t like the thought of running in the freezing cold. This meant my outdoor running spurts ran from around March-June… At the time, this race was the only major local one I could find in May (now Manchester half marathon has been added and is usually on the same day).

The route is lovely – starts and ends on the docks and goes through some really nice parks in Liverpool.

The course is relatively flat apart from one pretty mean hill at mile 4 – but once that is done, it is quite enjoyable.

It is called the ‘rock n roll’ half marathon because there are live bands and entertainment playing on route, which get better and better each year. Particularly enjoyed the addition of a steel band in recent years💃

It is very well organised and you get some decent race bling and stuff to grab at the end.

I’ve got some great memories from doing this race, with different friends running it too. Specifically in 2016, with the support of my good friends Natalie and Abby, I completed the run 6 weeks after Adam passed away. This was an extremely difficult time – Looking back, I know that I was not OK and was going through a really tough time but still managed to complete a half marathon. It is amazing what the human body is capable of if you manage to get yourself out of a dark place and push through.

This year, Jemma and I were all set to go together, making this Jemma’s first half marathon on the lead up to New York Marathon.

Sadly, Jemma was hit with whatever illness is currently doing the rounds and was absolutely gutted to have to drop out the day before. She sounded dreadful so we can let her off and sign her up for Wilmslow half next month instead… 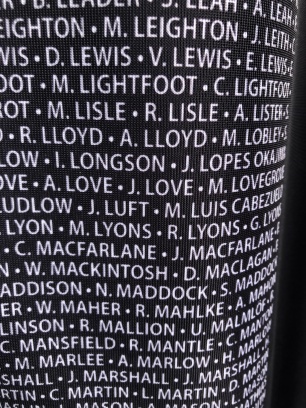 Mine & Jemma’s names on the registrants wall.

So I was going it alone…travelling with Mum and Andy, who are getting increasingly stressed out with me and my poor time keeping.

We were on the last min as per usual (sorry guys), and they kicked me out of the car amongst the road closures.

I ran about a mile to the starting line and squished myself within the crowd around the 2hour pacer.

This race is incredibly popular. To give a bit of perspective: The race began at 9am and I crossed the start line at 9:20am… You can see the 3mile point when you first begin and I saw people already at that point… By the time I got to the 3mile point, there were still people starting. SO MANY PEOPLE.

I was debating whether or not to listen to music on the way around, but that was quickly ruined when I poured water on my head to cool down and temporarily broke my left headphone. So I embraced the atmosphere and the bands instead.

I saw Mum & Andy around 3miles which was lovely, before they went off to Gusto for a nice brunch whilst I tackled the remainder of the course.

I had to walk up part of the monster hill near mile 4 (really need to practice some hill sprints), but still managed to pick up some speed and was on the way to smash my PB of 1:56:50.

The dream was quickly shattered when I turned onto the docks at mile 9.5 to face the final stretch the whole way back. It was BOILING. Everyone was slowing down and I figured I needed to as well out of fear of collapsing.

My favourite people at this point were a group with water pistols, handing out mini ice pops 💜

There is so much I can say about this race. Running is so hard and mentally challenging but I do genuinely try to enjoy it, and this race makes the enjoyment part a bit easier. A lot of people ask me if I do actually enjoy running, I guess my face on this pic says it all:

Having a great time.

I crossed the finish line at 1:57:15. 25seconds off my PB in that scorcher – I was really really pleased!

You also get a free pint… Sign up you know you want to..

I remember the first time I did this race in 2015, I had to book the next day off work because I could hardly walk. I went to work today so I guess we can say it is getting ‘easier’..? However I am currently nursing a pretty bad toe nail injury that I will spare you the details of…🤮

All in all a great event and I will definitely be revisiting next year for the 5th year in a row, given that I don’t hate running by that point…

The fundraising is going so well at this point of the challenge. We are over half way and very close to £3,000 – a huge thank you to everyone that is following my journey and sponsoring. If you would like to donate then please visit: https://uk.virginmoneygiving.com/EmmaBramwell2

The race calendar is filling up… If you would like to be a part of the challenge and run for a good cause with me, to raise awareness and support for mental health, then please get in touch. There is everything from 5k to half marathon.. Just 14 races to go!