There isn’t much to say about another scorcher of a run up and down a bypass so this blog will be relatively quick and full of pictures of the amazing team of people who joined on this challenging race.

About a month ago, Megan messaged me about this 10k and asked if it would be one of the 30, as her and Russell (Dyson) were thinking of doing it. I had mapped out around 29 races at this point and had room for one more so decided to sign up. Running up and down a bypass, how hard could it be?

I recruited Rob Jones from work who you may recognise from the Chocathlon race – a self proclaimed non-runner who wants to get into it a bit more and see what results he can get from these races.

Stuart McGuire, my best pals brother, has recently had surgery following an ACL injury. He can no longer play football due to this but since recovery (surgery only in December!) he has been building up the strength to go running and wanted to join in on a 10k. We originally planned that a 10k in September would be good timing, but having double booked, he signed up for this race and upped the training…eek! 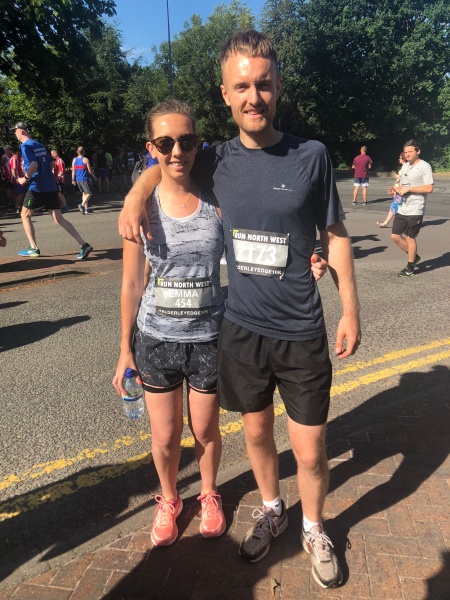 Phil Lane got a last minute transfer after the race had sold out and ran with a number and name ‘Joanne’ on it. Phil won my 10k race back in April and is pretty rapid.

I know this level of support can’t happen for every single race, but when it works out that there is a big crowd of us, it is just amazing. We all met around 45mins before (not on the last min as usual) and stood around chatting, having a bit of a pre-race photoshoot and discussing what times we were all going for.

Rachel looked puzzled in the direction of a man wearing a metallic silver shirt which we soon realised was Dyson. I had forgotten that on a boozy Friday night, he had agreed to a bet to wear this ridiculous attire to run in for the exchange of a £40 donation… Thank you to the person who made this bet, a) for the entertainment factor and b) for the kind donation of £40!

After standing around watching Dyson melt for a bit, we thought it was time to line up. I told of my trick to start further back so that I am constantly overtaking people. This was a must-do for this race as it would be so mentally draining in the heat to be constantly overtaken if struggling after starting too far forward. 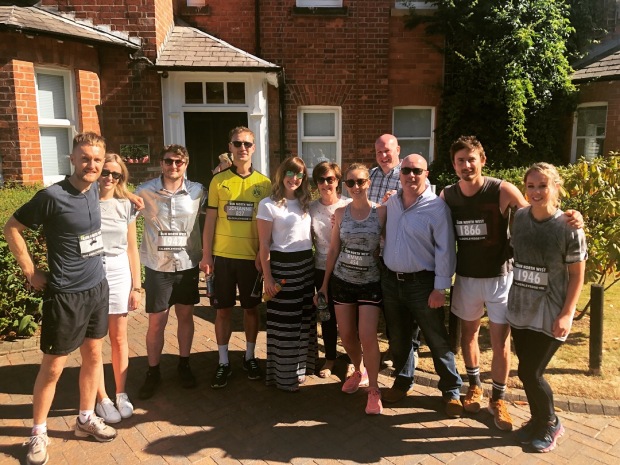 Me and Phil ended up just behind the 60min pacer and ran through the starting line with the upmost enthusiasm:

Full video, courtesy of Darren, can be found here >>

Now this is the bit where there is not much else to say. For anyone that knows the area, the bypass of choice for this race is the new addition that connects Wilmslow to the other side of Alderley Edge. The run was basically an out and back of that section. Aaand that’s it.

It was boiling (again) – I would say tougher conditions than Wilmslow Half, but maybe I am just finding it all difficult. There was absolutely no shade whatsoever and just a big long stretch of road.

Luckily, Phil stuck with me despite usually completing these things around 40mins? (correct me if I am wrong there, Phil). Although my level of convo went as far as “this is really hard”, it was good to have someone to keep pace with and encourage me.

I tried to spot Rob and Stuart as they were on the way back but only saw (and high 5’d) Stuart. Rob said that I stared straight at him with a really confused face as if I couldn’t believe he was that far ahead. But nope, I just didn’t properly see him.

Phil and I crossed the finish line at 56:46 and to be honest I am just buzzing I made it in under an hour.

We found out that Rob was our winner in an amazing 49mins closely followed by Stuart around 53mins. Amazing work! I have floated the idea of them working towards Manchester Half Marathon in October and, in post-race highs, they both seemed keen 😄

After downing a bottle of water we soon saw Dyson sweating over the finish line, still wearing the shirt and Megan shortly after! I am just so so happy that everyone finished in that heat – I know there was a few dreads on the lead up with how hot it was going to be but everyone smashed it. 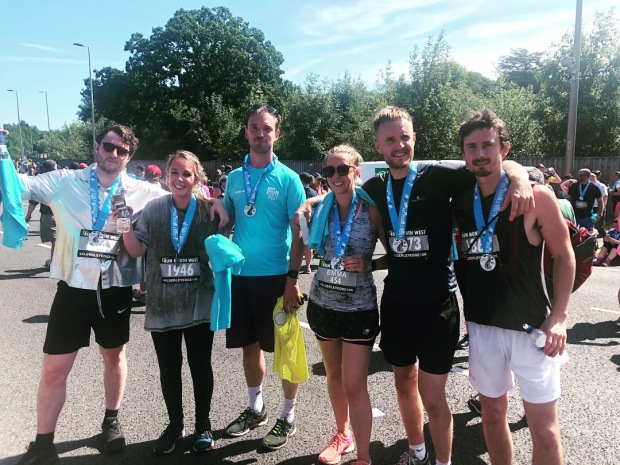 Don’t underestimate the power of the 9:30am sun – I’ve got some cracking racer back tan lines again just from this race and also a really nice FitBit white bit: 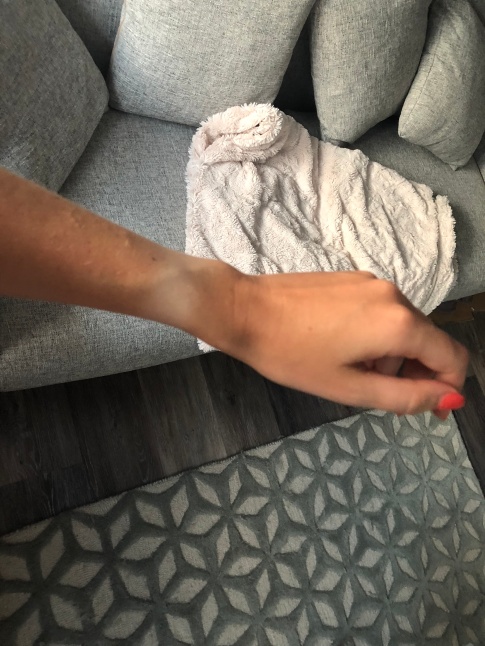 A huge well done to everyone that finished today and a massive thanks for being involved in a 30for30 race! And thanks to the spectators who stood around in the sun and walked 1km to go and watch the live band who had stopped playing by the time they got there 😂

So it is great to have people there running with me and now quite a lot of people are saying they want to get involved, especially in 10ks. SO – as we are now on the TEN RACE COUNTDOWN, I thought I would list a few local ones to get involved in – for anyone reading this and thinking they fancy it – If I know you a lot, a little bit or not even at all, get in touch and sign up. It would be great to have you there.

Sale Sizzler 5k Series:
Starting this Thursday, I am doing the Sale Sizzler 5k series to make 1 of my races. This is 4 x 5ks on a Thursday evening, every fortnight throughout July and August. They are in Whythenshawe Park – good for local and short distance and you don’t have to sign up for all 4. Very well organised – find out more here >>

Trafford 10k:
Postponed following bad weather in March, this race on 2nd September is the only 10k I have left on the schedule. So if you want to get involved in a 10k like today, then this one is for you. This race sells out (if it hasn’t already) so be quick if you would like to take part. Find out more here >>

Manchester Half Marathon:
In October and local for anyone wanting to try out half marathon distance. I am doing this but haven’t yet signed up. This is a flat and fast half so good for a first half marathon. Find out more here >>

My full list is on the ‘upcoming races’ section. but these are the good, local ones like today’s race 🙂 Please join me on a race if you have been reading the blog and fancied getting involved.

2/3s of the way through and just 10 more races to go – the countdown to New York Marathon is on! If you would like to sponsor, please visit: https://uk.virginmoneygiving.com/EmmaBramwell2