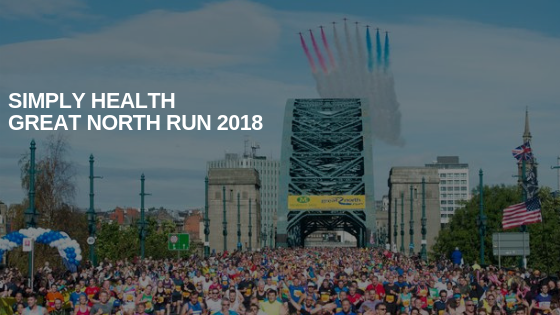 A few months ago, I applied through Mind for a guaranteed place in the Great North Run. A work colleague had done this race and told me how amazing it was. It’s on the telly and Mo Farah does it – I wanted to do it too.

I was told of the £250 minimum fundraising for a place – which thanks to you guys, we hit a long time ago.

Not a lot of thought went into it after that – this would be my 7th half marathon of the year, and although they aren’t easy, I figured I would be race ready by September.

Around the time of gaining guaranteed entry, I was booking my accommodation for New York and generally going through money like it was going out of fashion. So we decided that we would drive up on the morning of the event. This is a charity exercise after all, so keeping costs at a minimum seemed like a good idea.

On the lead up to the race, I thought I had no qualms – When anyone asked me what I was doing that weekend, I simply replied with “The Great North Run” and told of how I was travelling up on the day. No biggie.

My friend Bianca (who you may remember from the previous blog), told me that she was surprised at how chilled out I was being.

The day before the event, I ran a 10k at Tatton Park as a bonus run (because marathon training). And after catching up with some friends in the day, I got my stuff ready, checked my travel logistics and went to bed at 8:30pm for the first time since I was 9 years old. 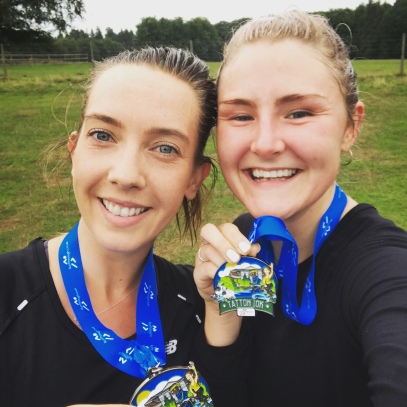 Nanci and I at the Tatton 10k the day before…

The alarm went at 4am for a 5am departure. My stepdad had his picnic ready for the day and I felt lucky to have people in my life that would get up that early on a Sunday morning to taxi me to Newcastle and wait around whilst I race Mo Farah…

Things took a turn for the worst though when I started to feel a little anxious and overwhelmed on the way. My chest was tight and I was worrying about doing the run – working myself up for no reason.

I had read that there were more people that do this race than the NY marathon and I had a sudden realisation that I had under-estimated it and not put enough thought and prep into the day.

This started to make me panic a bit and wonder why my chest felt the way it did. Had I done too much running? Was I damaging my body? Maybe I shouldn’t push myself so much? All of these ridiculous, negative thoughts.

I then remembered that I had felt this pain whilst trying to go off to sleep a couple of nights in the week. This bothered me some more.

We decided to stop off at a service station to take a break and get a cup of tea etc. We were still about an hour away but the place was full of Great North Runners – looking a lot chirpier and more up for it than me.

This made me feel worse.

We pulled out of the service station and with only an hour to go in the car, I longed for more time. I told Andy to stop talking to me for a while whilst I tried to calm down.

I can’t describe the feeling and it sounds so over dramatic now… it was just an overwhelming, crushing feeling that I couldn’t shake.

I text Bianca to tell her that the surprisingly chilled Emma didn’t exist anymore and that I was panicking. She gave me a little pep talk, in short telling me to get through the day and then focus on having a chilled week afterwards, having a break from running and binge watching Love Island Australia instead. Delightful. <<— that is exactly what I’ve been doing this past week…sorry for the delayed blog writing, everyone needs a break sometimes.

It wouldn’t be me if a race went ahead with little worry or drama. Life of an over-thinker…

We pulled up in the car park of the metro station that I had chosen to travel from at random on my rushed logistic planning. The car park was full of other runners doing the same. Runners were getting ready in their silly outfits and I put my Mind t-shirt on for the first time. 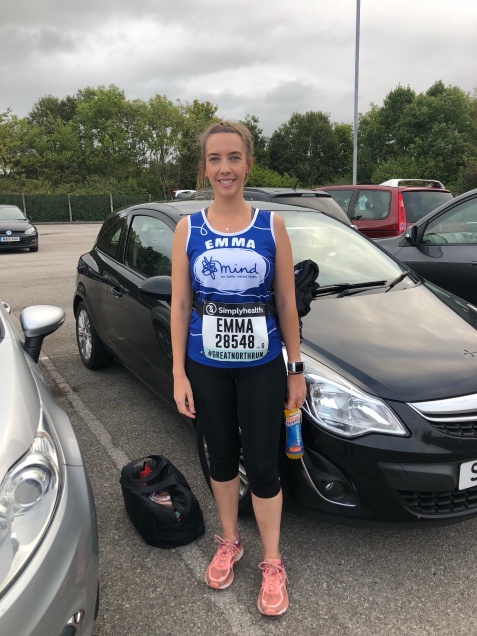 In my MIND charity vest

We travelled into Newcastle Centre on a packed tram and walked like sardines to the start line.

Somewhere in the hustle and bustle, my worrying subsided…

57,000 people had signed up to do this race. FIFTY SEVEN THOUSAND.

The amount of people was just ridiculous. I asked someone how long it can take to get over the start line as I really wanted to make it to Tyne Bridge for the red arrows. It could take up to 45mins!

We had to make our way to our ‘pens’ based on our colour coded numbers ready for the start. 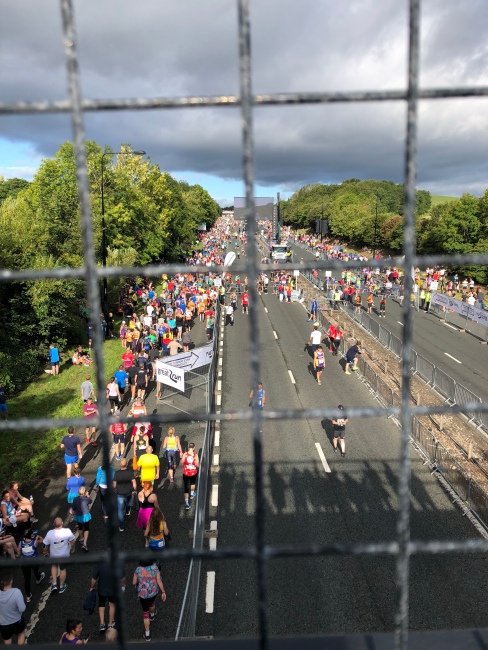 Getting ready to enter the pens

There was a severe lack of portaloos near my pen area, and having panic-drank lucazade, water, tea, coffee etc. since 4am – I had to wait in the longest queue ever and miss the warm up. No one needed to see my warm up dancing on TV anyway.

It took me 22mins to cross the start line and I didn’t make it to see the Red Arrows fly over the bridge BUT I did see them on the flight path there and also finished in time for their show in South Shields.

The race atmosphere was amazing – the streets lined with people the whole way, cheering on their family, friends and even strangers. I think after this whole 30for30 malarkey, I’d like to just go and support a local race and hand out jelly babies. The people that do that are true winners in my eyes 😍

Running with that amount of people got me so hyped for New York – but if I hear “oggy oggy oggy, oi oi oi” ever again in my lifetime, it will be too soon…

The race was never going to be a PB course with the amount of people but I made it to the finish in just under 2 hours 5mins.

I grabbed my stuff and stood watching the Red Arrows show which was pretty impressive.

Mum text to say she didn’t see me on TV and I met Andy at the Mind charity tent where I introduced myself and told them a little more of what I was doing. There were so many Mind vests running that day – with an estimation of around £300k fundraising for the charity(!!) 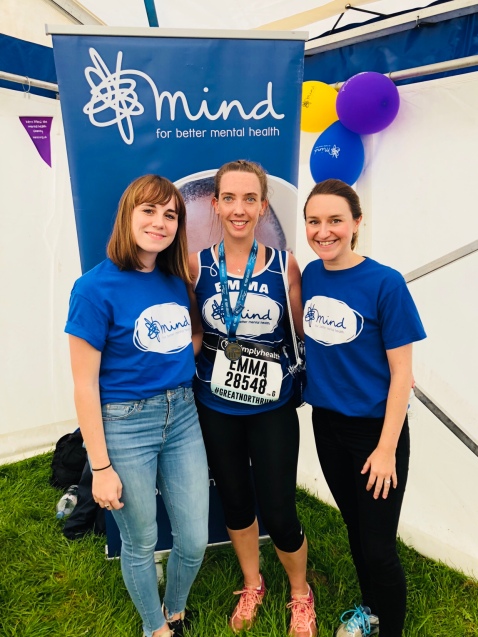 Poor Andy had been traipsing around Newcastle getting on the tram to try and see me at certain points of the course. Due to the sheer volume of people, he realised he had missed me on the tracker and kept going – aiming for the finish line as the final chance to see me race… and missed it! 🙉 He didn’t see ONE person running on his travels 😂 He drove all the way to the Great North Run…and missed it… bless.

We had fun queuing time together, back to the metro – and a nice drive home where I rinsed the remains of the car picnic. We didn’t get back until 8pm 😴

It was a killer of a day, that started with panic and ended in big smiles… but it was well worth it ❤️ 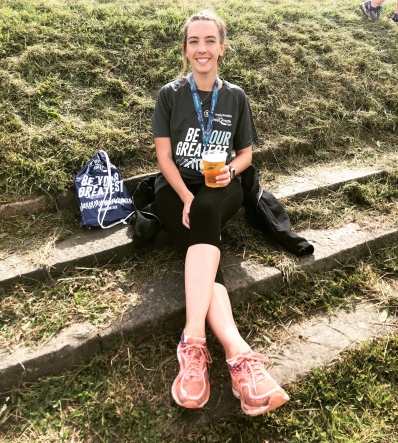 With doing so many races, it is easy to forget what an achievement each individual race actually is. This is one of the biggest half marathons in the world and a massive experience within itself. If you would like to sponsor, please visit: https://uk.virginmoneygiving.com/EmmaBramwell2

A little break now until race number 28 – I will be posting guest blogs and more about why I am running for the chosen charities. If you have a story to tell and would like to write a blog post, then please do get in touch! 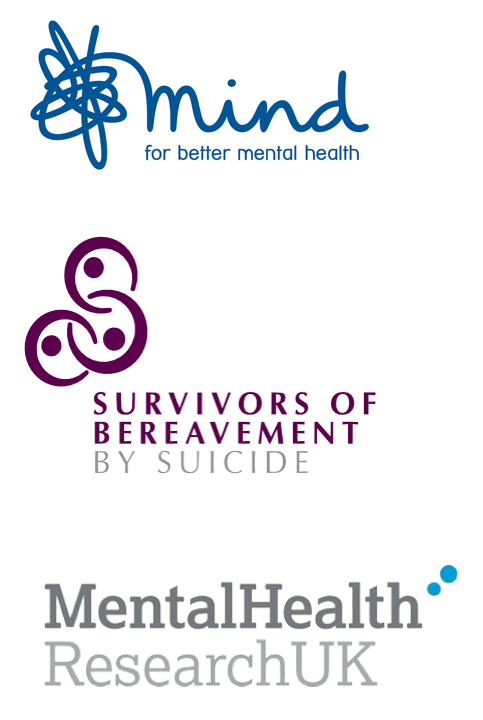